All Collections
Avalanche Bridge
Security
What is the role of the Bridge Nodes?

What is the role of the Bridge Nodes?

Written by Rocky Rock
Updated over a week ago

The Bridge can be broken down into two main parts: the SGX application and a set of third-party indexers and verifiers called “Bridge Nodes.” The Bridge Nodes are responsible for indexing the Avalanche and Ethereum blockchains and submitting eligible transactions to the enclave for processing. The Bridge Nodes first look for transactions involving supported ERC20s (Supported ERC20s) being sent to the Ethereum wallet and successful calls to the unwrap function on the Bridge’s Avalanche tokens (Example Bridge Token). For these transactions to be considered eligible, they must transfer enough tokens so that the operator can keep a portion in order to pay for the gas fees. If the USD value of the assets moving across the Bridge is less than the USD value of the gas costs plus a small buffer (set to $5 at launch, but configurable), the transactions will not be indexed by the Bridge Nodes. The Bridge’s frontend calculates these requirements in real-time in order to prevent users from sending ineligible transactions.

The SGX application requires 6 of 8 Bridge Nodes to submit the same transaction before generating the signed transaction to process the Bridge transfer on the other network. It’s important to note that each Bridge Node communicates directly with the secure SGX enclave both in providing its secret share and submitting eligible transactions (more details are provided in the below section).

For security reasons, neither the enclave nor the Bridge Nodes are directly accessible to bridge users. Instead, they’ll explicitly whitelist each other’s IP addresses for direct communication. In addition, all communication between the Enclave and Bridge Nodes will be encrypted and verified using TLS and include an HMAC signature. For relaying information to the Bridge user base, each Bridge Node hosts a JSON file containing the current bridge settings, assets requirements, and attestation report. The frontend is set to disable itself if there’s any discrepancy within the critical information (Ethereum wallet address, supported token information, etc) reported by the four Bridge Nodes. 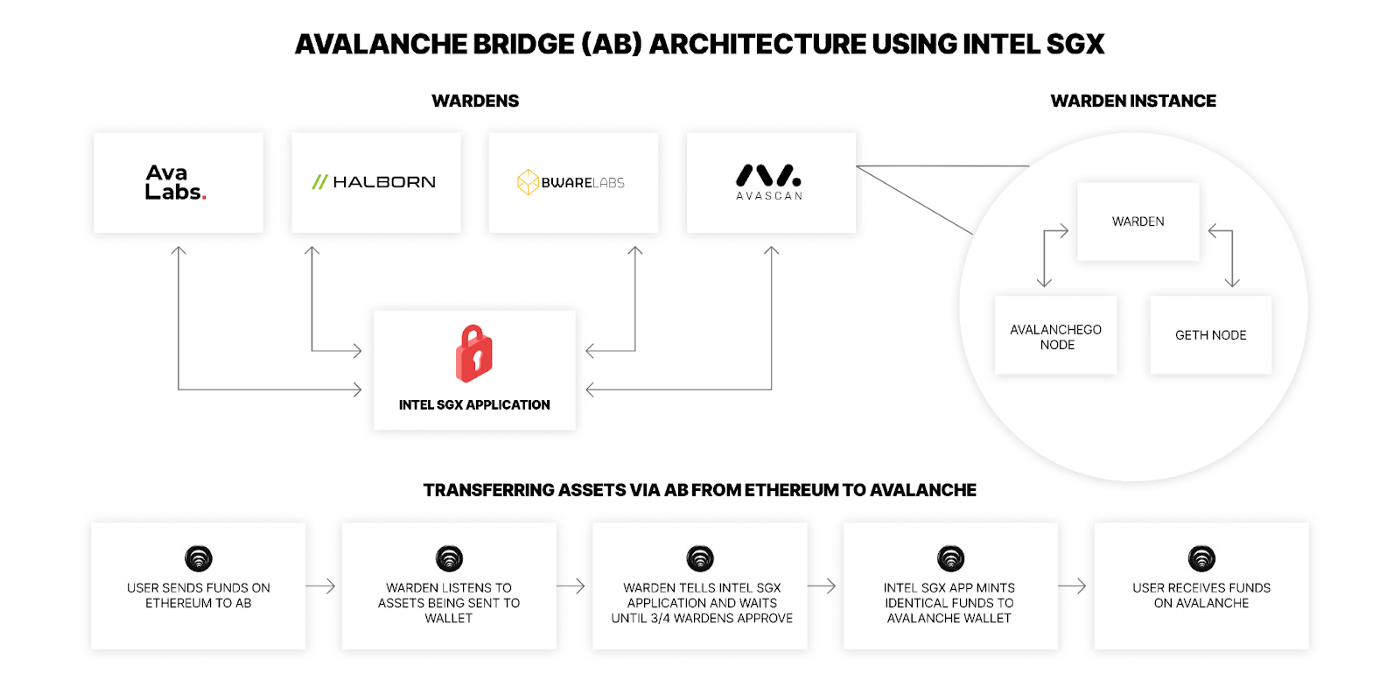 The Intel SGX application consists of a trusted codebase that runs within an enclave, and an untrusted codebase that runs outside. The untrusted code is responsible for initializing and starting the enclave as well as running the remote attestation server. Remote attestation is the process by which a third party can attest to a remote entity that it is trusted, and establish an authenticated communication channel with that entity. As part of attestation, the enclave proves its identity, that the source code hasn’t been tampered with, that it’s running on a genuine SGX enabled platform, and that it has the latest security updates. Within the Bridge Architecture, each Bridge Node will perform attestation upon startup and post the report to a public JSON file.

On the restart, the enclave requests the shares from the Bridge Nodes over a TLS connection, requiring 6 of 8 to recompute the master secret. After attestation, the Bridge Node encrypts and returns its secret share using the shared session key generated during remote attestation. The Bridge reconstructs the master secret from a threshold of secret shares and uses the master secret to rederive the private keys for an Ethereum address (used to hold funds) and Avalanche address (used to deploy the smart contracts and mint new assets).

The Bridge Node instances consist of three main components, a Golang server used to index ETH and Avalanche transactions and communicate with the Bridge, an AvalancheGo node, and an Ethereum Geth node. The Bridge Nodes’ responsibilities are broken down below:

As announced previously, the AEB relayers will sunset their bridge during the week of August 9th in favor of the new Avalanche Bridge. The sunset process will consist of the AEB bridge being shut down. Asset transfers across the AEB bridge will be disabled permanently. Once the Bridge has been shut down and any pending transactions finalized, the AEB relayers will come together to transfer all ERC20s on the Ethereum side to the Avalanche Bridge Wallet. The Avalanche Bridge has been configured to ignore transfers coming from the AEB contract addresses so no funds will be minted in response. Once the transfer has finished, a new enclave build will be pushed enabling swaps on the Bridge token contracts. At this point, the Bridge frontend will enable token swaps and a set of token conversion tutorials will be released.

The Avalanche Bridge makes use of Intel SGX to create a quick, secure, and low-cost bridge between the Avalanche and Ethereum Networks. It consists of a secure SGX enclave and a collection of trusted partners running Bridge Nodes. The design enables the Bridge to reduce the on-chain requirements to a single action (smart contract call or ERC20 transfer) without sacrificing security. As a result, the Avalanche Bridge provides one of the cheapest, fastest and easiest to use cross-chain transfer processes available today.