Written by H
Updated this week

The Avalanche Bridge™ protocol can be used to transfer BTC from Bitcoin to the Avalanche® C-Chain and vice versa. This document answers common questions about bridging between the Bitcoin and Avalanche networks. If there are additional questions, please contact the Ava Labs team on the Avalanche support website, Discord, or Telegram.

What is the minimum amount of BTC for a successful transaction?

Where can I actually bridge my BTC to Avalanche®?

What is the Core extension?

Can I use Core.app/bridge for BTC bridging?

What are some of the key differences between bridging Ethereum and bridging Bitcoin?

How does the Avalanche Bridge™ work?

To initiate bridging from Bitcoin to Avalanche®, a transaction is sent on Bitcoin from the Core browser extension that transfers BTC to the bridge address controlled only by the SGX enclave. The bridge is designed to only support Pay-To-Witness-Public-Key-Hash output types on Bitcoin. In order to ensure that the BTC transfer has this output type and meets all of the bridging requirements, users should always use the bridge UI in the Core Wallet extension that is built to provide a quick and easy bridging experience. Once this transaction is accepted into a block on Bitcoin and receives the necessary number of confirmations, it will be indexed by the Bridge Nodes and reported to the Intel SGX application for processing. All transfers across the Bridge must be approved by Bridge Nodes that secure and back-up an encrypted piece of the Bridge’s keys. At this point, the SGX application mints (creates) the equivalent amount of BTC.b to the user wallet that sent the initiating Bitcoin transaction.

Similarly, when moving BTC.b from Avalanche back to Bitcoin, the user sends a transaction on Avalanche that calls the “unwrap” method of the BTC.b contract, which burns (destroys) the BTC.b tokens. The Bridge Nodes will index this transaction, and it will be processed by the SGX enclave by sending the equivalent amount of native BTC back to the user’s wallet on Bitcoin 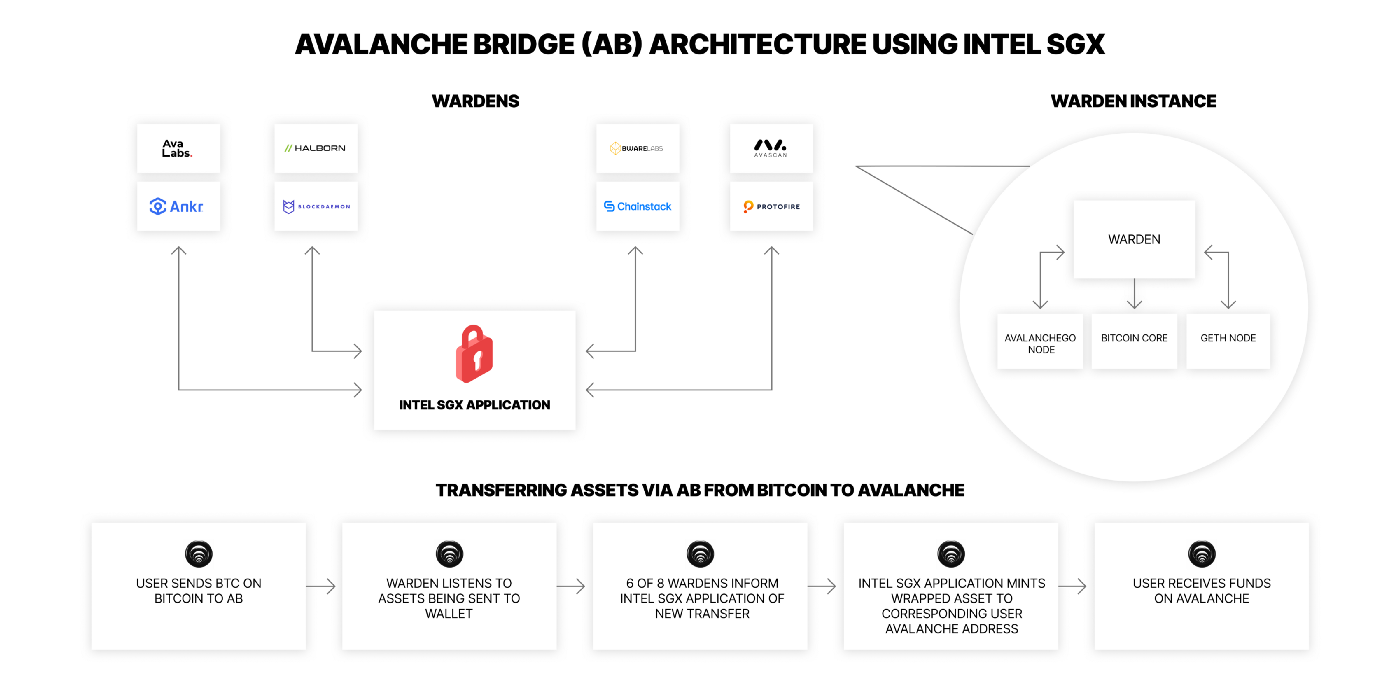 How does the Avalanche Bridge™ derive the Bitcoin address?

Bitcoin uses an entirely different address scheme than Ethereum. In order to determine the Avalanche address that corresponds to a Bitcoin address that provided collateral to the bridge, the Bridge Nodes recover the public key of the user wallet from the signed transaction on the Bitcoin network and use it to derive the Avalanche C-Chain address. This way, the funds on both networks are controlled by the same private key or mnemonic phrase, and that secret never leaves the sole possession of the user’s wallet.

Is there an airdrop provided for users when they bridge from the Bitcoin network to the Avalanche® network?

Similar to bridging from the Ethereum network, when users bridge $75 or more of assets from the Bitcoin network to the Avalanche network, a portion of AVAX will be airdropped to help pay for initial transactions. AVAX is used to pay for gas on the Avalanche C-Chain and is needed to perform on-chain actions. The amount airdropped should help users get started.

What if the transaction fees are more than the amount I am transferring?​

When moving assets from Avalanche back to Bitcoin, the Avalanche Bridge™ charges an in-kind transfer fee. The user interface does not allow transfers of less than the fee amount. If a user manually generates and issues such a transaction, the bridge will mark the transfer as invalid and not process it.

What does the .b suffix in the token name mean?

When Bitcoin is bridged to Avalanche, it is represented by an ERC20 token on the Avalanche C-chain with the symbol BTC.b. The “.b” indicates that the token was bridged from the Bitcoin network, just as Avalanche Bridge™ tokens bridged from Ethereum end in “.e”. Each BTC.b token is fully backed by a Bitcoin locked by the bridge enclave application. The BTC.b token contract can be found on Snowtrace here, and the bridge enclave application Bitcoin address can be viewed here.

How long does a bridge transfer take?​

Can I speed up the Bitcoin network transaction?

No, increasing the Bitcoin network fee will not speed up the transaction. Once it's included in a block there is no way to speed up the next 5 blocks getting created. Therefore, this will still typically take approximately 1 hour for all 6 confirmations.

This transaction only takes a few seconds, and if the Avalanche Bridge interface shows it taking longer, then check the transaction in the Explorer to see if it was successful. Users may need to add the token to the wallet on the Avalanche network for it to appear.

Can I send tokens created on Avalanche® to Bitcoin?​

No. The Avalanche Bridge™ only supports the transfer of BTC and ERC20 tokens created on Bitcoin and Ethereum, respectively, to Avalanche and back.

What types of BTC withdrawal addresses are supported?

At this time, the Core extension supports “Native Segwit” addresses for BTC withdrawals and these start with “bc1q”. For more information on the types of BTC addresses please visit this link.

What if my transaction is not visible in the explorer?​

Are there tutorials on how to use the Avalanche Bridge™?​

Yes, you can view video tutorials for bridge functionality here.

Is there an airdrop for BTC bridging transactions?​

On Avalanche, transaction fees are paid in the native asset, AVAX®. In order to send transactions on the Avalanche C-Chain, you must have sufficient AVAX in your wallet to cover the cost of the gas for the transaction. To help you get started on Avalanche, the bridge will airdrop you a small amount of AVAX if you move more than $75 (subject to change) worth of tokens over from Bitcoin. In order to avoid running out of AVAX to cover your transaction fees, we recommend first obtaining an adequate amount of AVAX. You can acquire AVAX on Pangolin or any other exchange.

How is my BTC address linked to my Avalanche® C-Chain address?

In order to determine the Avalanche address that corresponds to a Bitcoin address that provided collateral to the Avalanche Bridge™, the Bridge Nodes will identify the public key of the user wallet from the signed transaction on the Bitcoin network, and use it to derive the Avalanche C-Chain address. This way, the funds on both networks are controlled by the same private key or Recovery Phrase, and that secret never leaves the sole possession of the user’s wallet. Similarly, when a user goes to transfer funds from Avalanche back to Bitcoin, the user's Bitcoin address is derived from the public key identified from the Avalanche transaction that burns the wrapped asset.

Can I send assets to a different address on the other network?​

Do Bridge Nodes rotate their secrets and does this affect the Avalanche Bridge™ addresses?

What are the Avalanche Bridge™ addresses on Bitcoin and Avalanche®?​

Note: Never directly transfer tokens to these addresses. You should use the Avalanche Bridge user interface, which checks for malformed transactions.

What is the BTC.B token contract address?

For a more in-depth read on how the Avalanche Bridge works, please read the following articles.